The Limit of Throwing Weapons

Yeah, that's not a dedicated throwing class though is it. If you are spending half your time acting as spear support you are a hybrid. 6 Javelins isn't enough, on average you probably use between 2-3 javelins on a single enemy. Meaning you are likely to engage 2-3 enemies per round before you must scavenge ammo or resort to your backup weapons like the spear.

If throwing was great people would play it, currently almost no one plays it except for experimentation or derping around.

"If throwing was great people would play it, currently almost no one plays it except for experimentation or derping around."

Throwing is great, I've made a lot of nasty kills with throwing axes.

That sure means a lot and totally can't be applied to every weapon in Warband.

"Hey guys, I killed someone with the practice sword, so it can't be weak!"

Bloedwoud, Leader of Order of the Slayer (Slayer)

"Hey guys, I killed someone with the practice sword, so it can't be weak!"

I killed someone in one hit with a torch in melee, so it can ´t be that weak either !. xD.

through takes while against full plated lel.

The spike has 21piercing in thrust , while for deployable usage it can do use dmg comparable to spears a lot times.

Jepekula the wooden sword does lot cases more dmg then regular sword due it does blunt trauma dmg instead of cutting on platy´s not mention stunlock,

but many players using wooden sword use it becouse of low str requirements thus less effective.

About Throwing weapons , most folk use not many skill points on it , but above 6 power throwing it can do a lot dmg to even 1 hit kills on heavy infantry.

The best usefull when around 20 or less.  thy very good.

but due lack of ammo it harder use as full focust build vs ratio of enemy players and lack of proper teamwork.

(through can use xbow with it and use last throwing in melee).

This was all fun and all guys but...the feedback is too mixed....look at this poll here, the majority of the votes call for no change at all...  :'(

The only way we could get a change in the throwing system is if homer wants to, he would make it cool anyway, and I hope he does it. :'(

I guess instead of unlocking a perk in a usage for extra throwing weapons, the ones who want to use more than 1 throwing weapon should pay like twice the money for let's say 6 instead of 3. That looks fair in my opinion but this could be discussed furherly as well.

This was all fun and all guys but...the feedback is too mixed....look at this poll here, the majority of the votes call for no change at all...  :'(

The only way we could get a change in the throwing system is if homer wants to, he would make it cool anyway, and I hope he does it. :'(

Which means that many people want more variety.

What about a few less limits..?

To be honest...after some thinking...

I think we should just reduce the ammont of thrown weapons....decreae the number to only 1 thrown ammo....and for a perk you could get maybe two ammo depending on the weapon.

And ruin my thrower

We have to make certain sacrifices....1 thrown weapon ammo is all we need....we can adjust to this change.

Having only one thrown weapon will make players be more carefull...no more throwing many axes into team melee

Instead of throwing their ammo like crazy, they will throw it only at the perfect moment, training their skills incredibly as they learn when and when not to throw weapons...going for perfect headshot and critical hits only

Also, it will prevent mewy/scavenger players stealing thrown weapons from the floor, since there wont be any...

so imo...we should add to the poll this option:

Decrease the base limit of throwing weapons ammo to 1.

(all above was joke, below is serious)

OR add a thrown weapon that is like a short spear, you get only one ammo but it does good damage to make it worth, and of course you can use it for melee also, because in medieval warefare most spear weapons were thrown for range.

... You are fighting the enemy with spear, and you wish to use your sword instead, you throw your spear into his knee and then quickly draw the sword.

Because many players drop their weapons on the battlefield to make themselves lighter while fighting the enemy, so instead of dropping your weapon as a waste, you can instead throw your spear for a chance to kill or wound the enemy you are about to face...pretty pro imo.....using shield with the throwable spear will make you feel pro, when the cav comes you stab and block with the shield, when the cav drops you can change the spear to throw, and throw it in his dismounted ass...pretty pro. next update imo 2014

Here is a picture of demonstrationg my propsal of throwing spear.....after melee, I switch the spear to throw and I throw it at the enemy then draw my sword:

And here is an example of a throwable spear being thrown at me: 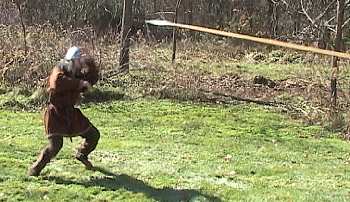 It actually does not sound too bad.
Could be worth a try.

Call it "Throwing Lance" or something and we come close to cRPG once again. I do like it though.

Euronymous, You have to realistic about these things.

Throwing spear would be cool, but is there a model to be used?